While most of us in Somalia and around the world use 4G, 3G or even 2G sometimes to go about our days, 5G is here. So what is the 5G network everybody seems to be delighted about?

Right now the other available networks are what we use to make calls, send messages and surf the web. The fastest network available  in somalia and in most countries is the 4G network and right now there are plans for it to be replaced by 5G. It is definitely a new faster network that has the potential to change how we use  the internet all together.

5G is a software oriented network meaning it might circumnavigate the use cables.while not entirely, it could replace the need for them by mainly operating on the cloud instead. This will dramatically increase the speed of the internet and it will be about a 100 times faster than the fastest 4G available.for example downloading an hour long movie would normally take 3G users 13 hours,with 4G users 13 minutes and you will be ready to watch the video in under 1.75 seconds.

For smart users to surf the internet, they need to first send a command to their respective network they are using at the time. 4G normally accepts command in 45 milliseconds while 5G networks take around 1 millisecond which is 400 times faster than the blink of an eye. Internet users will most definitely enjoy the speed at which they will be surfing the internet.

5G will also provide a much more personalised web experience using a technique called “Network slicing”. It’s a way of creating separate wireless networks on the cloud allowing users to create their own bespoke network. For instance an online gamer needs faster response times and greater data capacity than a user that just wants to check their social media.

Stay tuned for next week’s discussion on whether Golis Telecom needs to bring 5G in somalia. 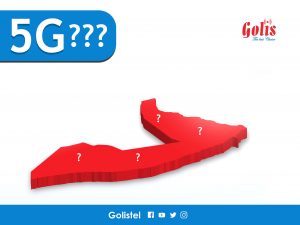